with knitting.  Like all great love affairs I just didn’t see this one coming.   I yearn after yarn, I pine for the perfect pattern, I swoon at the potential of swatches.  I spend way too much time photographing the objects of my obsession.

Whilst I’d love to get that drape-y lavender hued gorgeousness onto some needles today, I have terribly resolutely stayed my hands and I have instead knitted a hat using the free Knotted Hat Knitting Pattern from Toft.

I had planned to knit this hearty hat with 100g of Aran weight Toft Alpaca in Oatmeal, but being in love, I am impulsive and instead it has been knitted with a tiny bit of Toft and about 100 grams of Wensleydale Longwool.  The Longwool is Aran weight in the ‘Denim’ colourway and came in a scarf kit with some hand dyed locks of fleece.

The tiny bit of Toft makes up the cream stripes whereas the coloured stripes are created using the fleecey locks held together with the denim Wensleydale.   There are some more notes on my gauge and pattern modifications on Ravelry.

As a newish knitter I love:

But what became of the 100 grams of Aran weight Toft Alpaca in Oatmeal?  If I had any staying power it would have been joined by many more grams of yarn and it would have become a submariner’s sweater.  However, I lack the stamina for a full blown sweater so instead it has become my Cruel Sea Cowl…  I’ll save that story for another post.  Here’s a sneak preview: 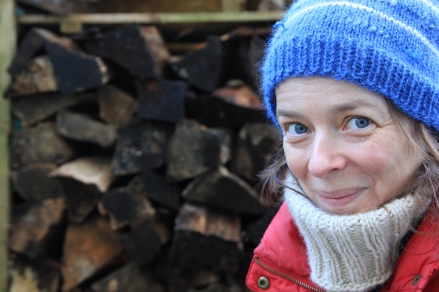 8 thoughts on “Laughably in love…”

Are you looking for anything in particular?